Coffee shops, and the ubiquitous coffee bars are everywhere.  You would think there isn’t any more room for another Tim Horton’s in Canada, but that is just not the case.

One of those areas that are relatively under served is the corridors along Highway 1 out of Vancouver. But that is changing with several Tim Horton’s that have just been completed and several more under construction.  The expansion is good news to all the Vancouver Ready Mix concrete drivers who spend their days on the road.

Thanks to Vancouver Ready Mix and MaXx Management, another Tim Horton’s will be ready for service by July 1, 2013  at 176 Street and 32 Avenue, Surrey, BC.

Vancouver Ready Mix poured approximately 200 cubic metres of ready mix concrete for the footings, building slab, islands, curbs, let down ramps and drive-through (will the ready mix truck fit through the drive through?).  The remainder of the building is steel framing.

So for those who need their Timmy’s in the morning, you don’t have long to wait for your roll up the win cup at the Tim Horton’s

– Esso “On The Run” located on The Pacific Highway at the intersection of 32nd Avenue. 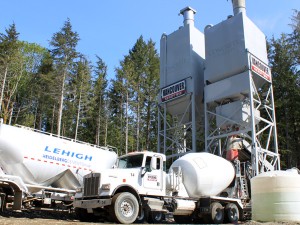